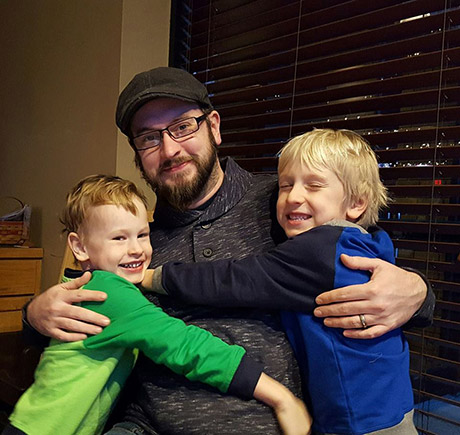 Body:
For most parents, watching their children forge friendships with other kids in the neighborhood is a standard rite of passage. But the initial social interactions of sons Jackson and Jameson held special meaning for Robb and Rebecca Drzewicki. They served as proof that, thanks largely to the early intervention and Build Up Michigan preschool special education services each received, the boys had developed into “very much the average kid,” Robb said. “The great part is that my boys are both in general education classrooms right now,” he said of Jackson, 8, a second-grader at Hoover Elementary School in Livonia, and Jameson, 6, a Hoover kindergartner. “I owe a lot of that to the programs I was able to access.” Both boys are on the autism spectrum. Jackson also has attention deficit hyperactivity disorder, while Jameson is particularly sensitive to stimuli. And although they are in general education, both also have an individualized education program – a document commonly referred to as an IEP, which details the special education supports and services each child is to receive. Another thing the brothers have in common: They also have come a long way since, when each was age 2, they began receiving early intervention and special education services. The Drzewickis first sought their pediatrician’s advice when they noticed that Jackson’s speech was delayed. Based on the doctor’s recommendation, they eventually arranged for Jackson to receive Early On® Michigan services through Wayne-Westland Community Schools. Early On provides free, in-home early intervention services to children up to age 3 with developmental delays, while Build Up is a preschool-based program that aims to prepare 3- to 5-year-olds for kindergarten. Both boys received weekly in-home visits from an Early On child development specialist and went to a two-hour preschool session once a week until, at age 3, they began Build Up preschool special education at the Jackson Early Childhood Center in Livonia. “We saw progress almost immediately just because of the social interaction,” Robb said, adding that the preschool teachers were skilled at encouraging students to participate in group activities rather than engage in solitary play, the latter being what children on the autism spectrum commonly do. The boys’ blossoming social skills helped them expand their circle of friends, including children in their neighborhood. Their progress also made Robb an advocate of early intervention. Robb, who calls himself a “preeminent PTA dad” based on his leadership position with the Livonia PTSA Council, constantly encourages parents to get help for their children as soon as possible. A key selling point: Early On and Build Up services are free – and they work, he said. “I can guarantee that I learned more than my children in those first few years,” Robb said. “Early On and Build Up teachers teach the parents and the children.” Indeed, parental involvement is key to overcoming developmental delays, he said. “The most important part is getting involved and staying involved,” Robb emphasized. “You’ve got to learn to be your child’s first and best advocate.” Robb describes Jameson as a “gentle giant” because he stands a head taller than most of his classmates, while Jackson has transformed from a nonverbal toddler to a full-on “chatterbox.” “He will tell you the whole life story of himself and anybody he has ever met,” Robb joked. He still remembers one of Jackson’s first verbal breakthroughs. Accustomed to hearing his son use only a couple of words at a time, “I almost fell to the floor when one day he said, ‘Dad, I would like some juice, please.’” Memorable moments like those, he said, are why he will never forget the fine work of his sons’ Build Up preschool special education providers. “Their preschool teachers are going to be invited to their high school and college graduation parties,” Robb said. “Because other than me and their mom, they’re the ones most responsible for where my sons are at.”